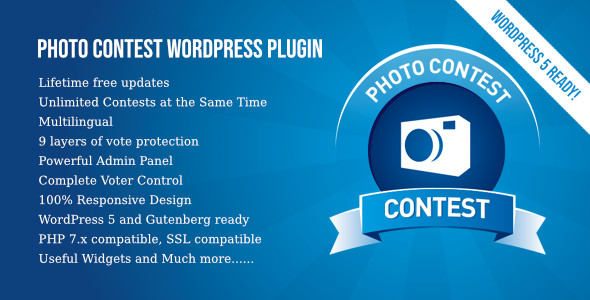 With Photo Contest Plugin create a comprehensive Photography Competition quickly and easily, either on your own WordPress website or as a complete standalone fit-for-purpose website!

Your competition is going to have specifics like terms and conditions that are unique to you, and you need the flexibility to adjust your competition parameters as required.

You can control almost every facet of your competition as required with Photo Contest – new submissions – comments, votes, image size and much more.

Photo Contest has been designed and developed with today’s users in mind and has been tested with all the major browsers for full compatibility. Of course your users might be in the field using a tablet, or a smartphone and you want assurance that your competition will meet those demands too.

No problem. Photo Contest is fully responsive and will display fluidly across all of today’s modern devices as well, smartphones, tablets, laptops and desktops.

You’re going to need design over the look and feel of your competition, as well as the data to analyse submissions and it’s all taken care of right out of the box.

Adjust and edit any text information, rotate & flip horizontally or vertically any image, crop, resize and limit file size – even assign photos to categories. You can show or hide names and votes on photos and of course, every view of each photo has been automatically counted for you. It’s also exportable data – a marketer’s dream!

Running a massive BuddyPress community, team or group? No problem! Photo Contest has been carefully tested and integrated with BuddyPress so implementation is simple.